So, I am Gea I have been a stylist for more than 2 decades now (scary when its written down), I am also Mother to two Teenage girls, Polly and Iris, which is interesting!!
We Moved to the Kent countryside from London, almost 6 years ago and really haven’t looked back.
We have a Cat called Mr Munro and 4 Rescue Hens (aptly named after the 4 characters from The Shawshank Redemption Film) Skeet, Snooze, Elmo and Ellis.

I am originally from Cape Town, which was where I started my career in Fashion on Glossy magazines.
After having my daughter Polly I decided to make the move from adults to Childrenswear.

Im an early riser so I get the chore of letting the girls out (Hens) which is super early in the summer months.
I get my girls up for school at 6:30 to get to the bus by 7:29.
Now we run a tight ship no room for anything to go wrong, I have on many occasions missed trains into London chasing after the chickens trying to get them back into their run. On one occasion, I had managed to get them in on time but not put the eggs I’d collected into the Kitchen (I put them in my coat pockets) Only to discover them on the train into London when I reached for my lip balm. Yes they had both broken – Country living ..

What makes a good child model?

I love working with children who don’t pose, I love all their quirky unconsidered movements. Also children who take direction well is always a bonus.
Children who enjoy photoshoots, when a child becomes bored I don’t think its fair to make them participate, they can have good days and bad days but if they clearly don’t want to do it then let them stop (like I had to do with my daughter in the case of her not enjoying playing the violin any longer) I had all these dreams of her becoming a new Vanessa Mae!

Any words of wisdom for parents wanting their children to become child models?

Choose a good agent beware of fraudsters of which there are quite a few!

What did you want to be when growing up?

Don’t laugh – a Nun at first then an air hostess, I guess I had a thing for uniformity. 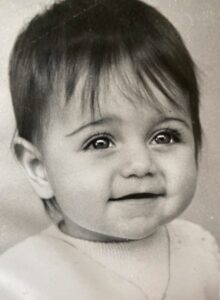 What smell reminds you of when you were younger?

The smell of cut grass reminds me of cartwheels.

Any film by Studio Ghibli.

What career would you have chosen if you weren’t in fashion?

I think I would haved liked to have been an Architect.

When were you/ are you at your happiest?

I am happiest surrounded by friends and family in the sunshine having a BBQ.

Have you scrimped or spent in lockdown?

What are your top 3 kidswear brands go to?

If money was no problem then Gucci and Burberry, I love Mini Rodini and Stella McCartney Kids.
And for pure theatre I’d say Aristocrat kids.